I finally found the time to upload my presentation at AusCERT 2011 with the topic “Transactional Banking Malware – Don’t fear the trojans; fear how they are configured to attack a banking website. A practical session with surprising outcomes” (http://conference.auscert.org.au/conf2011/speaker_Andreas_Baumhoff.html)

It is attached to this post (AusCERT_2011_Andreas_Baumhof_V2)… What do you think? Would love to hear some feedback.

Thanks for all the responses to the in-depth report about Carberp. Wow. We didn’t anticipate such a huge response…

As Carberp has developed quite heavily over the last couple of month and also because there are many different Carberp versions out there, I just wanted to quickly give you an update to our research and answers to many questions we got (that we thought might be interesting for you as well)

With much press attention, Microsoft released its free Antivirus Engine called Microsoft Security Essentials. We had a quick look at it and while Microsoft has done a pretty good job altogether (quick, nice user interface, fairly decent signature database), it is what it is: an Antivirus Engine that is based on blacklists / heuristics.

However this means MSE won’t protect you against the sophisticated Trojans that we hear in the press almost daily. We have successfully infected a machine with enabled and up-to-date MSE with a new mutation of the Zeus Trojan that is active in the wild. (for the interested reader, here is a screencapture movie that also shows how TrustDefender protects you from Zeus).

So in our opinion MSE will not make any impact on the malware landscape at all, however it will most certainly take market share from the other Antivirus Vendors and put the pressure on them from a pricing point of view.

We have posted some technical analysis to the mebroot/MBR/Sinowal trojan lately and while we at TrustDefender Labs focus quite heavily on the analysis of the trojans and infection vectors itsself on the client side, Researchers at the University of California looked at the data they received on the server side. This compliments our research quite nicely as it provides hard facts how successful those attacks are and how much data the bad guys actually receive.

The research was done by Researchers at the Security Group, Department of Computer Science at University of California, Santa Barbara released a very interesting paper “Your botnet is my Botnet: Analysis of a Botnet Takeover”. (see http://www.cs.ucsb.edu/~seclab/projects/torpig/index.html)

In this paper the security researchers “infiltrated” the Torpig C&C control network for a period of 10 days and their results are nothing less but astonishing. 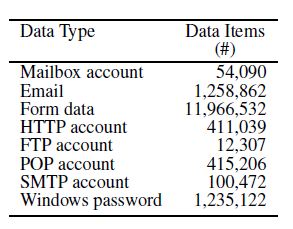 Key quotes by the original text are:

While 86% of the victims contributed only a single card number,
others offered a few more. Of particular interest is the case of a
single victim from whom 30 credit card numbers were extracted.
Upon manual examination, we discovered that the victim was an
agent for an at-home, distributed call center. It seems that the card numbers were those of customers of the company that the agent was working for, and they were being entered into the call center’s central database for order processing.

Quantifying the value of the financial information stolen by Torpig is an uncertain process because of the characteristics of the underground markets where it may end up being traded. A report by Symantec [37] indicated (loose) ranges of prices for common goods and, in particular, priced credit cards between $0.10–$25 and bank accounts from $10–$1,000.

If these figures are accurate, in ten days of activity, the Torpig controllers may have profited anywhere between $83k and $8.3M.